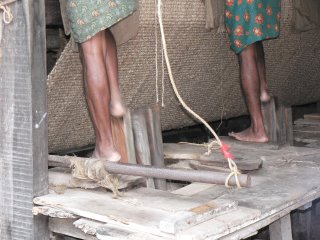 Yesterday I hit a low and couldn't deal with how hard people are working here just to be exploited by the system and the world market. We went to a coir mat making co-operative. Coir is collected from the outside husk of a coconut and turned into a twine rope. It is the stuff that make those natural fiber door mats and natural twine fiber carpets (perhaps called sissle?) Because of big business competion this cooperative can't get prices high enough to provide the better wages and benefits they were set up to provide. Big factories have come in and strong-armed and exploited the market and prices have dropped by a lot. If the company can't compete with their prices the order goes to the next guy. And... this whole area is filled with coir factories so competion is high. In fact it employs 60% of the people that live here.

The exploitation causes very very low wages and people living largely below the poverty line which is determined at $1 a day. Watching four men power a manual loom creating the carpets was heartbreaking because of the back breaking work they are doing. They are exposed to health issues with massive dust inhalation and exposed to poisonous dies and bleaches with no gloves or masks. They can only get enough work for 4 days a week which certainly does not give them enough wages to feed their families. And what makes me ache inside is that I don't believe there is any way to fight these workers battles. Walmart, Target and CVS... will continue to sell their mats and cheaper prices
and squeeze the workers with no concern over quality of life. It is the globalized world market way. 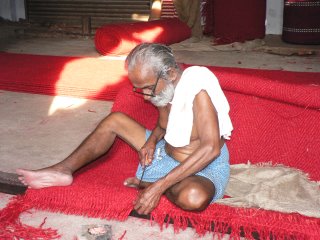 Kerala has a long history of progressivism and has been fighting for the people for a decade, but their ideals of co-operatives and worker protection are hard to achieve on a large scale level and companies would rather hire workers elsewhere and not have to provide the wages or protections. The ideals seem wonderful in study but I wonder what their future is.

On a positive note, Kerala did do a major land redistribution and most people at least own the land their house is on which gives them security not felt in most other poor areas. Here resources have been spread out among the people. Instead of having a few rich and mostly poor, it seems like most people live at a more equal level. While they don't seem to have much they have a political voice, education, healthcare and other basic civic structures which makes life better.

Kerala is a very different from the rest of India. I am beginning to get a better picture of the contrasts throughout India. What I see is a group of people who will work as hard as they can to provide for their families, who are the center of their lives. I see the contrast of the belief that the IT/call centers jobs and new wealth will spread to help all to the miles upon miles of poverty. There are signs of hope like new roads, new wells and signs of despair like sickness, deep, deep poverty and desperation. There is growth of the modern India and yet daily headlines that show the caste system is alive and well in the villages and the "untouchables" (now called Dalits) are kept in their place in society by a rigid set of social codes and violent enforcement methods and punishments.

cordelia, this post was heart breaking. i can imagine how you must be feeling seeing all this. i just wanted to take a minute to comment because i've been following your blog since eileen forwarded it to me and i'm so impressed by your journey, your writing and your photo's. i knew you from EJHS and GHS.

Cordelia,
Just read your account of the workers in the coir mat factories. I'm interested in the effects of Globalization in Third World countries. I blog at www.newvillagers.blogspot.com

The sociologist who was writing about specialization in the production of village goods was talking about exactly what you found; that if everyone is making the same thing (coir mats)..."This means that we all produce the same products so that there will be little demand for our products in the village and when we go to market outside the village we are all competing against each other for the limited market."

I'd love to show first hand the example from your travels.

Thank you for sharing with us from your travels.