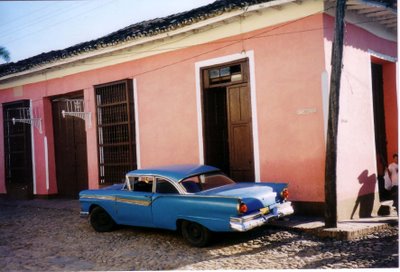 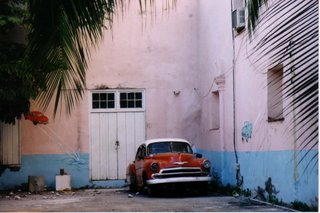 It has been three weeks since I returned from my second trip to Cuba. I’ve been having a hard time putting what I saw onto paper. I know that a few minutes in Plaza Vieja in Old Havana drinking a fresh sweet minty mojito and listening to one of the many Cuban bands that play all over would bring it all rushing back to me. The slow pace, the comfortable feeling, the beauty, the warmth, the history and most importantly those big smiles that radiate out of every person you see.

Cuba is a magical place. It’s both stopped in time and at the same time so very current. It’s got a rainbow multicultural mix of people. Locals could have long blond hair and pale skin, dark black African skin or most commonly dark hair and striking eyes of their Spanish ancestors. The cultural boundaries of racism that keep us separated in the US, seem to be gone there. It’s one of the good byproducts of the Revolution.

Although everyone is poor, their style shines through. They are well dressed and well pressed in classy contemporary clothing. Although many people don’t have running water, everyone keeps themselves clean and crisp. Barbershop chairs are a fixture on the sidewalks and they are always filled. Gifts of perfume and sweet smelling soaps are received with bright happy smiles. Cubans ooze confidence, rhythm, dignity, intelligence, strength and overwhelming friendliness.

Being there is addictive, because it makes me revel in life too. Somehow there the simple things in life seem so significant, while here in the States they sometimes get lost.

All day the streets are filled with Cubans of all races and all ages. They seem to be mastering the most important things in life: enjoying family; chatting with friends; listening to music; dancing; playing checkers with bottle caps on a hand drawn boards; diving into the Atlantic Ocean where it crashes into the Malecon, Havana’s coastal avenue and a huge gathering point for all the locals. Although Cubans don’t have a lot of material goods, they have a lust for life that bursts out of every block and every shady doorway.

My mom and I started off in Havana, the stunning, lively capitol city. It is steeped in history and wears it’s 485 years regally. As the jewel of the crown of the Spanish colonial empire, a tremendous amount of money flowed into Cuba. People spared no expense. Marble and wood were ornately carved and polished. Iron gates and railings were designed in the most complex patterns. Windows were adorned with stain glass. Houses resemble palaces.

Tourists flock to Havana Vieja (Old Havana) where there are buildings from every architectural period up to the beginning of the 20th century when the upper and middle class moved their lives to the other side of the city. Thereby saving the history by ignoring it.

Buildings were left to crumble until one of Fidel Castro’s ministers convinced him to start restoring them one by one. The international community has provided a lot of money and expertise to help the Cubans in this expansive mission.

Instead of restoring a whole block at a time, they seem to fix one building on one block and then one on another, so that a deteriorating building stands in contrast to one that looks brand new. They fix more and more buildings so that some blocks have been completely repaired, but I especially like the blocks with contrast.

I suspect you have all heard about Cuba’s cars. From what I understand, since the Revolution in 1959, Cubans have not been allowed to buy new cars. If someone owned a car before the Revolution, they were allowed to keep it, which means cars from the 50’s continue to be fixed, painted and polished. We all love our neighbor’s classic car that drives in the local Memorial Day parade. Imagine a whole street filled with them. Some look like they just came out of the show room while others look like they are being held together with crazy glue, rubber bands and bubble gum. All of them, though, are lovely to look at with their gracious curves and bright colors. They add too Cuba’s classy, nostalgic style.

While last year we headed East out of Havana to sugarcane country, this year we headed to the Western province of Cuba. This province is called Pinar Del Rio and is known as the tobacco growing region. We were there during tobacco harvesting season and the fields were a deep green. While all farming regions are beautiful in their own way again Cuba has something special. Speckling the long horizons and deep green fields are ox carts and horse carriages. With the high cost of oil and the ill effects of the many years of US Embargo, farmers have gone back to the traditional ways of farming. All along the sides of the roads “cowboys” with big straw hats on horseback travel to and from their fields.

We kept being reminded of the Marlboro man and all his masculine mystery. One day as the sun was setting just over the hill ahead of us, a man sat on horseback on the horizon totally shadowed by the light behind him. As Americans, the cowboy has such a strong meaning and to see them everywhere is an indefinable thrill.

As the biggest island in the Caribbean, Cuba is blessed with beautiful beaches on most of its shores, as well as deep blue seas. So, to top off a cultural and visually stimulating week, we traveled to an island off the Western Coast called Cayo Levisa. A 45 minute boat ride brought us out to an almost deserted island. We were lucky enough to be able to reserve one of the 20 bungalows perched directly on the beach. The sand felt like talcum powder between my toes. The waves lapped the shore and lulled me to sleep. The sun basted my body as I floated in the warm sea. Cayo Levisa has 3 kilometers of abandoned beaches that resemble everyone’s beach fantasy, palm trees, endless ocean skyline, seashells everywhere... And after all with only 40 people on the whole island, it was as if we each had our own private beach.

The most interesting part of travel is that it takes me out of my daily routine and changes my perspective on life. Whether its seeing beautiful architecture and people that are so different then the people that live around me, meeting so many people from other countries so that I am able to think about the world around me in wider parameters or seeing people who have so little and being reminded how blessed I have been in life. I feel so lucky to be able to see the world and am constantly looking for my next adventure.

I hope all of you will find places in the world that make your heart stir.

Cordelia
Posted by Cordelia No comments: