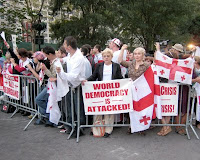 Now that I have a job its harder to get away for long trips to exotic locales. Not to worry, I will still be able to travel but just less frequently.

I often feel thankful for living in New York since it gives me a chance to experience the world at my doorstep. This week that was especially true. Each year the United Nations opens it's session with a full meeting of the General Assembly. This means that the leaders of almost all the nations in the world gather here in New York and bring international excitement on a whole different level.

For the last two years I have spent time sitting outside the UN watching delegations go in and out. A small interesting crowd of folks like me usually gather to watch the excitement.

Its amazing site to see some many different faces, colors, languages and forms of traditional dress. Then every so often the excitement rises when one of the leaders comes through with his delegation. I wish I knew all their faces, but I don't But here is a short list of the ones I am sure I saw: 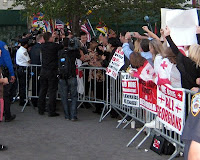 The presidents of Turkey, Georgia, Senegal, and Bolivia (Yes, I saw Evo Morales for the second year in a row!) and the Premier of China. I also think I saw the President of Colombia, but can't be sure it was him.

The highlight of afternoon with A LOT of highlights, was when Georgian President Saakashvili jumped out of his motorcade to address a crowd of pro Georgian protesters who were shouting to get Russia out of their country. When the crowd saw him coming they started singing their national anthem at the top of their lungs. For me it was a moving sight. My knees shook for a few blocks after. The Georgia conflict has been all over the headlines, but this made it real.

Some of you will be mad to hear that I had a pretty strong patriotic reaction to seeing POTUS' motorcade. I know he has been a bad president for our overall position in the world, but watch 20 motorcycle cops stream in before a LONG motorcade and finally seeing the American flag and presidential seal stirred a little American pride in my soul. I might not like him, but he is the President, and like it or not my countrymen picked him. I can't wait till next year when President Obama is inside that limo. 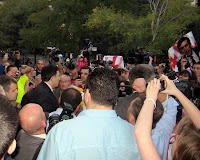 After all that excitement I topped off the week with a trip to Little Senegal on 116th Street for an amazing African feeling. How cool is it that I could see their president one day and then go to a place crowded with his people on another and never be more than an hour from home!

I love that I can see the world in my city. I love New York.

**The photos are of Georgian President Saakashvili arriving at the rally.
Posted by Cordelia 1 comment:

The Democratic Convention in Denver 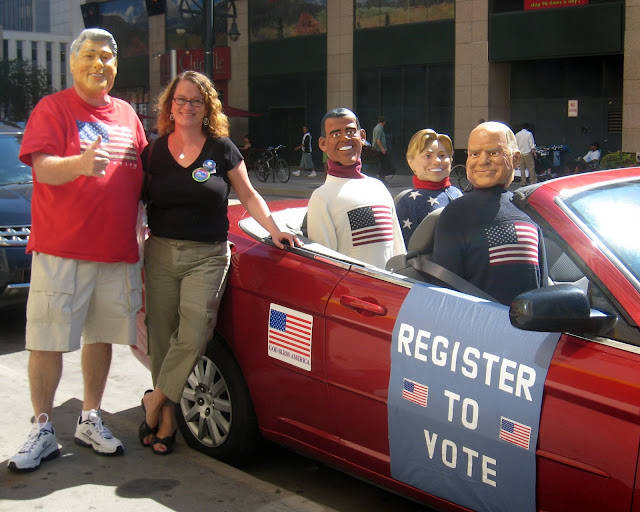 Photos from the Convention (Click here)
Posted by Cordelia No comments: