This is a posting by a Sharon Jumper, who went to Afghanistan with me, that talks about organizations that do good work in Afghanistan.

Afghanistan: The Threat of Insecurity is holding backing the Strides of Progress 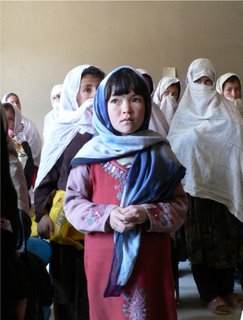 is at a crossroads. The led coalition forces have not been able to secure the countryside and continued heavy fighting in the South and North is preventing real progress to reach the whole country.

After over 25 years of war Afghans are tired of fighting. While the Taliban was a strict authoritarian governing system the one thing they represent is security. Under their rule the country became safe again. Opium production was brought to a halt and the warlords were largely silenced in parts of the country that the Taliban controlled.

Under the US-led-coalition-forces a much more complicated reality has set in. In order to fight the war of terrorism, the coalition joined with the warlords in the outer regions, ignoring their human rights abuses and flagrant abuse of power. These alliances have made it hard to create a strong central government, which is essential for long term security. They also have made it possible to raise opium production to larger numbers than have ever been see before.

Meanwhile a major change is happening in the war. Nato is taking control of the ground war. As opposed to , Europe is committed to the war in and with the recent rise in fighting has even agreed to double their forces in the volatile Southern provinces where fighting has heated up. The on the other hand has said they will reduce the total number of troops they have in the country. This sends a bad sign at a pivotal time. The Taliban believe they can wait out the Western forces and retake control when the West pulls out.

The has been constrained by . The forces in have been put on a strict budget. Focus was changed to when the Afghan situation still needed attention and so the half assed attention they are giving has not been able to secure the whole country and win the hearts and minds of the people.

I believe this is a crucial time for the to show its commitment to the Afghan war because this is a war people really believe we could win and if we win we could stop the training of terrorists within its borders as well as, really begin to build a civil society there.