Dakar Senegal - The Second Time Around 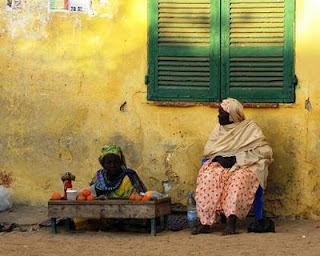 After two weeks in Benin and Burkina Faso, Dakar felt like another planet. Beautiful palm promenades by the sea, fancy hotels, big houses... Dakar is much more developed and much richer. There are plenty of spots of poverty, but what became clear to me was its sense of style and cosmopolitan feel.

One clear fact is that Senegalese people are beautiful, drop dead beautiful. Tall handsome men. Gorgeous women. And Dakar knows how to show them off.

I had two separate daylong visits where Callie, a Princeton in Africa Fellow who is working for the UN World Food Program in their West Africa regional office showed me around. I visited her office, met with her boss, learned more about the work WFP is doing in the region. Afterwards Callie and I spent time walking around downtown and seeing the sites. Dakar is on a peninsula and has beautiful blue water all around it and tropical sea breezes.
Posted by Cordelia No comments:

While I was visiting, I packed up three Princeton in Africa Fellows, the two who live in Ouaga and the one I had been travelling with from Benin and we journeyed 6 hours up North to the edge of the Sahara desert to Gorum Gorum, where a huge weekly market takes place. It is attended by many of the nomads in the region. Here the faces of Tuaregs and Fulani’s brightened up the view. It was a feast of color and tradition. The livestock market was packed with men pocking and prodding goats and cattle since these nomads are herders. On all my drives in Burkina Faso the roads were lined with beautiful sprawling dry desert lands that were dotted with heads of goats, donkeys and cattle across the red clay soil.

I am a people watcher and experiences like Gorum Gorum are my candy. Seeing such a diverse sets of faces and meeting people from all over is why I travel.

Here are a few photos: 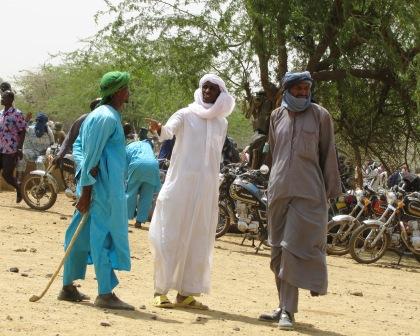 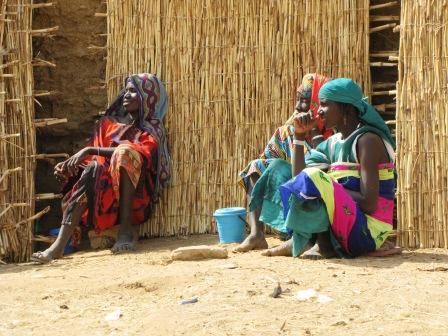 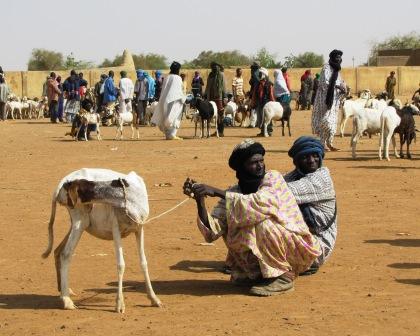 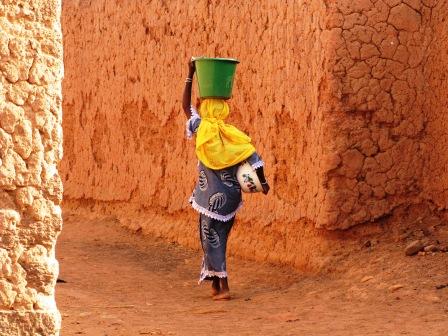 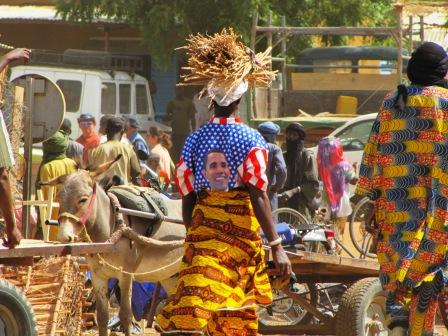 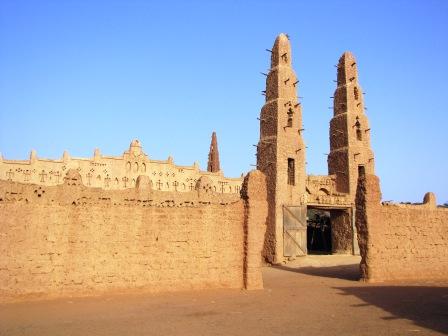 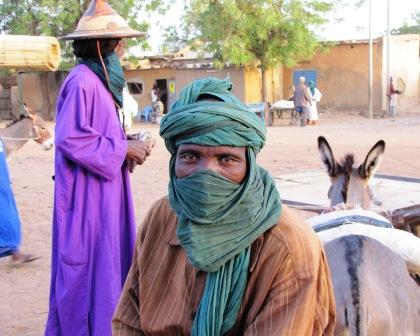 Ouagadougou, the capitol of Burkina Faso 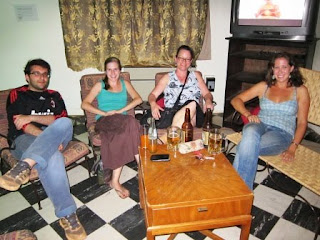 My multi-day road trip filled with long bus rides led me to Ouagadougou, Burkina Faso, the capitol city. Here two Princeton in Africa Fellows work at 2iE, an engineering graduate school dedicated to sustainable solutions for Africa’s problems. I was able to visit the school and also explore the city.

Ouaga, doesn’t have a lot of big sites to see, but Burkina Faso does have a vibrant culture and is often referred to as the friendliest place in Africa. My free time was spent walking around the markets of downtown people watching as I dodged hundreds of motos and bicycles that ply the streets.
Read more »
Posted by Cordelia No comments: 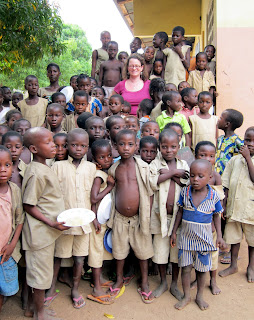 Benin is a little sliver of a country that few people have heard of and few people care much about. It’s certainly not on the tourist track and one can’t get many insights about it on the pages of travel pubs. I went there to visit a Princeton in Africa Fellow at the UN World Food Program.

I have been wanting to go to West Africa for a long time now and Benin was as good a place to start as any. In fact, Benin was filled with rich sites and experiences and had quite a lot to offer. Benin is the place voodoo comes from and was home to one of the larger slave ports. Its Northwestern region has dramatic landscapes and is home to a group of people called the Somba and their homes, Tata Somba houses, have a particularly interesting design that brings traveler to see and study them. It’s also an interesting place to begin to explore French colonial culture and see that they French are keeping a strong grip on the Francophone countries of West Africa. 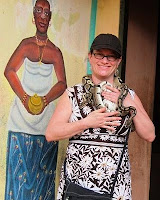 Ouidah, Benin on the Western Coast of the country is the birthplace to voodoo and much of the country believes in various forms of animist religions. Small fetishes (voodoo offerings to the gods) can be seen above and beside doorways and larger fetish temples exist throughout the country. The most obvious fetishes are the remnants of blood and chicken feather that can be seen in many places. 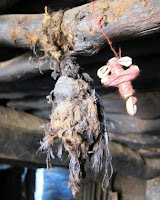 Although I can’t begin to understand the religion and its practices, I did come upon one annual ceremony and able to view the activities and dances that followed. I also stopped by the more touristy Temple de Pythons, where, for a few cfas, they will drape you with live pythons and take your photo. Pythons are a big thing in Benin and when I was up north, far from the Python Temple, a kid I befriended saw the picture of me with them he was so shocked that he made everyone on the street come look at the photo and all their eyes opened wide.

In the North in the Tata Somba country, I found my favorite fetishes. 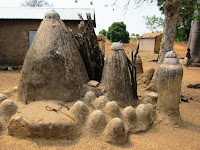 Outside the local houses there are many different sized mounds. Each mound represents a member of the family. Prayers and sacrifices are made on these mounds to protect the people. The part I found most touching was that they said that even if a family member moved far away to Europe and such, the family could continue to pray for and protect them at home.

Benin and Its Slave Trading Past

Benin also was the home of a major slave trading kingdom in Africa, the Dahomey Kingdom. Their rule spread over areas we now call Togo, Benin, Nigeria and Burkina Faso. Selling slaves to Europeans in exchange for weapons helped them build their strength. The weapons fueled their ways and the slaves they sold were often their prisoners of war. The memorials to the slave trade in Ouidah are vivid. First one starts at an old Portuguese fort where slaves were exchanged. Now there are photos and art work that remind you of the terrible injustices done there and speak to the strength of the Dahomey Kingdom and African’s direct involvement and profit in the slave trade. Along the 3km route to the water where slaves were marched, there are statues and memorials. There is a tree, the Tree of Forgetting, where slaves walked around 9 times in order to purge their memories of Africa before they got on the boats and then there was another tree, the Tree of Return, marking the point of last goodbyes. By turning three times around the tree, slaves could ensure that their spirits would return to their homeland after death. Along the route one is reminded of the incredible brutality and all the efforts made to break everyone’s spirits and also all the people who died before even setting off on the journey.

Benin is officially on the New York Times travel track

Click here to see what the New York Times has to say about traveling to Benin and about vodun on February 5. 2011.  I was there two years before.  I'm such a trend-setter!
Posted by Cordelia No comments: 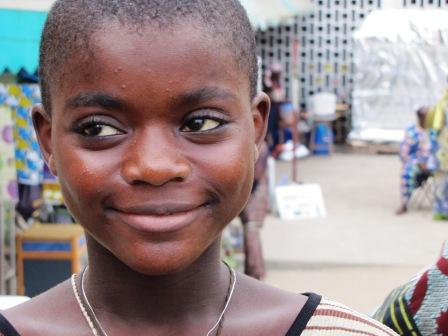 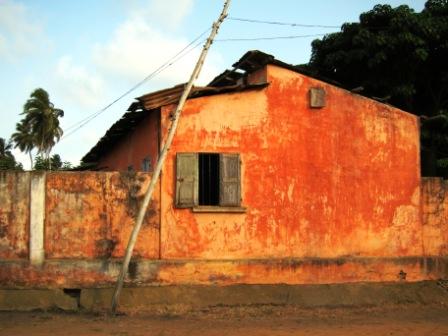 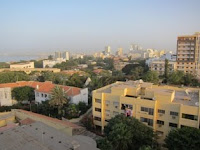 Three days of snow delays cut my weekend visit to Dakar to an 7 hour jaunt. Thanks to a Princeton in Africa Fellow, I jam-packed the day and at least got to see some stuff. We had breakfast at a rooftop restaurant with a wonderful view of the coast line and the cosmopolitan city below. I got to visit World Food Program and meet her boss. Then we spent a few hours walking around downtown and topped it off with lunch at the French Cultural Center an amazing green oasis in the middle of town.

I certainly wasn’t in Dakar long enough to form major impressions, but first I want to say that it is GREAT to be back in Africa. There is just a feeling here that makes me feel at home. Instantly I feel relaxed and welcomed. I just can’t get enough of the big smiles and friendly faces.

This is my first trip to West Africa and I can tell its going to live up to my expectations. The thing that makes this city stand out from other places I have been is the colorful wardrobes the men wear. All over the world women continue to wear traditional dress and in Dakar they do too. The colors and fabrics are awesome. But usually men wear the same clothes no matter where you are, but not in Dakar. Many of the men are colorfully dressed too. Long robes, impressive embroidery and a variety of hats dot the sidewalks. The abundance of color here gives India a run for its money.

Unfortunately I have no photos yet, but hopefully I’ll get time to take some on the other day layover I have there.
Posted by Cordelia No comments: 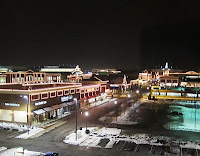 If you are checking in to see my first Africa post, you might be disappointed because although I was supposed to leave three days ago, due to the DC snowstorm, I have only made it to Columbus, Ohio, where I am stuck in transit. (Long story.) Of course I am an equal opportunity people watcher and I've never been to Columbus before so I took the airport guys rec and got a hotel near the Easton Town Center, a huge fancy sprawling mall, and spent the afternoon walking around and observing Americans in their native environment.

To say that this is a contrast to what I thought I would be seeing right about now on the streets of Dakar is a huge understatement.