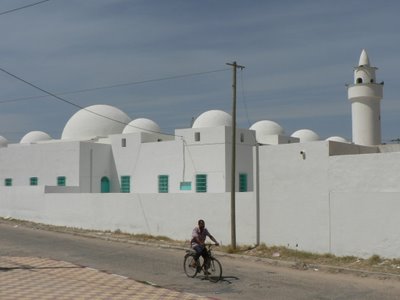 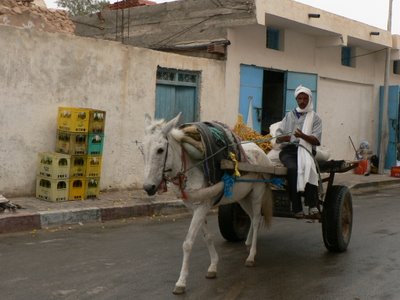 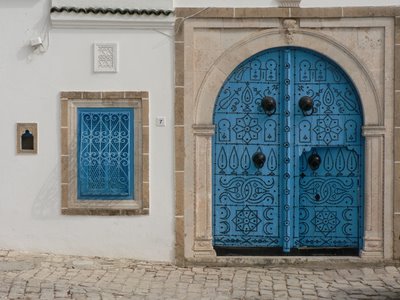 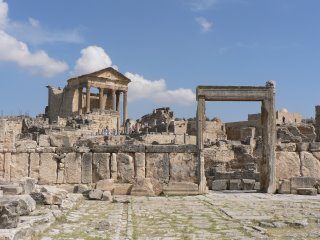 If you all are like I was, you probably don't even know where Tunisia is so first lets have a little geography lesson. Tunisia is located on the Mediterranean Sea in North Africa. It’s nestled between Algeria and Libya in the center of the northern coast.
It might make it easier to hear that it’s just South of Sicily, 80 km across the water. It is an Arab country that is 99% Islamic. Being only about the size of Washington State it’s an easy journey from the beach to the desert. In fact the southern end of end of the country in is the mighty Sahara Desert.

It’s a former French colony and its capitol, Tunis, has all the swish and style the French could breed into the Tunisians. I'm sure they have never heard the word metro sexual but these men define it with deep dark eyes and intense smokey looks wrapped with a stylish haircut and clothes. There are beauty parlors on every corner.

Tunis oozed of the memories of it's French past with a main boulevard lined with sidewalk cafes where people wile the day away over a cup of coffee and a pastry. Its all about watching people and they view is fabulous.

The women here are not typical Islamic starters. This is because in 1956, when Tunisia declared independence from the French, their first leader worked hard to create a secular state and reduce the power of religion. He stripped the powers of the Imams by eliminating religious madrassas (schools), gave women new rights and appealed to them to take off their veils. (more on this in my blog) Now about 30% of the women in Tunis are covered but the others are stylish and most definitely uncovered!

My friends who I visited there are concerned because they believe that more women are veiling these days. No one is talking about it, but they speculate that it is a political statement to support Lebanon and other Islamic struggles. Or perhaps a reaction to the French not letting the girls wear headscarves in school in France, as many Tunisians live in France for periods
of time and then return home. The worry is that fundamentalism is rearing its ugly head. For now though this is a "good" Islamic state and I have been bopping around alone with no problem except perhaps if you call brushing off handsome men a problem?! : )

Tourists come to Tunisia to enjoy it's vast beaches, but I'm not fond of beaches so I headed out to the Southern part of the country to see the desert. I was able to experience oasis' that pop out of the hard flat desert from nowhere because of the underwater springs that feed them. Here they count the number of palm trees that an oasis can support rather than the
number of people. As date palms are a great source of wealth.

Dates and olive oil are Tunisia's two finest products and all of their land is lined with one or the other unless is rolling sand dunes. During the Roman Empire trade times these products made the country to very rich and today they manage to still keep their people well off. I even heard that they have 65% middle class. I'm still not really sure how they maintain their economic status, but the wealth has provided money for a solid infrastructure, which is certainly good for travel.

You might be wondering why I chose to come to Tunisia, so maybe now is a good time to tell you. As I have previously stated beaches bore me but something fascinates me about Islam and as a women alone there are not that many Islamic countries that I can go alone. I also met a friend on my Afghan trip who lives there and teaches at the American School in Tunis. She
and I had many long conversations about the state of the world while we were in Kabul and I still had more to say. So I have spent the last two weeks traveling the country and spending time in Tunis with her and her husband for a varied set of experiences.

Tunisia was a major crossroads of empires. The Phoenicians, the Romans, the Vandals and the Byzantines, the Arabs, the Ottoman Empire and then finally the French lived on its shores. The country is covered with ruins that tell its history. Carthage, the Phoenician capitol is its largest and most famous, was largely destroyed by the Romans and then rebuilt
in their style. Dougga and El Jem are large well preserved Roman sites. Dougga perched upon vast hillside surroundings, perhaps saved because of its distance from the coast and other development, and El Jem, a coliseum, towering over the modern town that surrounds it. It is said that it may be the best preserved coliseum, even better than Rome.

Remnants of the Ottoman influence rise about the roofs with the octagonal minarets on the mosques that look distinctly different from the square Tunisian Arab ones. Ottoman tile work covers some of the famous Islamic pilgrimage sites. Religion plays a role in Tunisian history, past and present, too. Kairouan, one of their towns, houses the forth holiest site for
Islam behind Mecca, Jeruselem and Medina. The belief was that the site was connected by underground springs to Mecca when one the the Arab conquerors found a silver cup he had left in Mecca and promptly built a mosque at its site. Now 7 pilgrimages to Kairouan can take the place of one's one time in a life trip to Mecca.

Islam definitely fascinates me. Hearing the echoing of the call to prayer shouted from minarets above the city rooftops moves me to seek more information. I constantly yearn to understand how we can live in the world together and begin to communicate and understand each other. That being said, the conversations I was able to have in this moderate country show that the gap is growing. The war in Iraq infuriates them. I was told that Osama Bin Laden was not one of them, but the
Western action of killing children in Iraq only makes them want to join him. Lebanon to them is the first major victory of Islam over the West and the belief is strong that Islam is right and will be victorious in the end. I'm still not sure exactly what they mean.

All in all Tunisia is an interesting mix of ancient and modern. Horse carts ride the roads besides cars. Some people wear Western clothes while others stick to their traditional dress. The vast desert leads to open blue sea. History flows from its pores and one can't help but get carried away into the time of great empires. Seeing yet another culture only reminds me
what a vast world we live in and reminds me how lucky I am to see it.


And here are some photos to illustrate my journey:

(Please realize that although there are many women who are unveiled I am sharing photos of the many
traditional dresses of Tunisia and therefore showing many veiled women.)
Posted by Cordelia 2 comments: 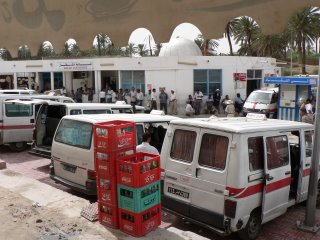 There is one thing about Tunisia that I especially like. As a single traveler it is easy to get from place to place. They have set up a system of shared taxis that runs smoothly and cheaply.

Basically the way a louage works is that there are these huge parking lots full of white vans and station wagons and they each have a role of driving to and from an assigned location.

I arrived to this chaos knowing my destination and listening to many men yelling their destinations. There is a order to this chaos though, as I mumbled my destination shyly I am quickly pushed off to the very very back of the lot. Some driver nods and says he is going there. So far there are no other drivers so he asks if I want a coffee and leaves. I, of course, feel know I have to wait alone in this isolated place till the van fills up and feel like I will be waiting there for hours when suddenly minutes later six other people arrive and we are on our way. Its amazing! And in two hours I am in Karouaun.

The system has worked seamlessly for me all around the country. It makes it easy and cheap to travel alone.
Posted by Cordelia 2 comments:

Tunisia: 9/11 in an Islamic Nation

Spending the five year anniversary of 9/11 in Tunisia, a secular Islamic nation opened me up for even deeper reflection about the direction the world is heading in. I am here visiting a friend I met while visiting Afghanistan. We have spent many hours thinking about the fundamentalism that is spreading around the world and how the failures in US foreign policy are only making things worse.

Tunisia is a model Islamic nation. At the time of their colonial independence from France, their first president set out to Westernise and modernise the country. He saw Islam as a force that was holding the country back, so he set about reducing the role religion had in society. He outlawed religious schools, thus cutting off religious leaders power. He also abolished sharia'a (conservative Quranic laws) courts. He importantly also gave women rights. He ended polygamy and gave women the right to divorce. He banned the veil in schools and started a serious campaign to end the wearing of a garment he regarded as demeaning.

Today the changes are very visible. Women in Tunis, the capital city, largely go without veils and look empowered and down right glamorous! (Of course the French have a way of making everyone glam or as my mom says "swish"!) The girls have all the strength of NY girls. Around the rest of the country more women are veiled but few are fully covered which has become the norm in much of the Arab world.

But even here there is evidence of growing conservatism. My friends say many more women are veiling. They are not sure why but think that the Lebanon war may be contributing along with the no veils in school policy in France where many Tunisians spend time. Also it is said that the government has a zero tolerance policy for fundamentalism and if an iman speaks too conservatively he tends to disappear.

This country has one strong advantage to the other islamic nations in the world. I was told it was 65% middle class. With so little poverty people just aren't as angry. They have a benevolant authoritarian leader who makes good decisions on behalf of his people.

The saddest part of 9/11 is that many Islamic nations have used it and the US's reaction to it to deflect the anger of their people to their own governments. We have been raised as an even worse bad guy and that makes us all less safe.